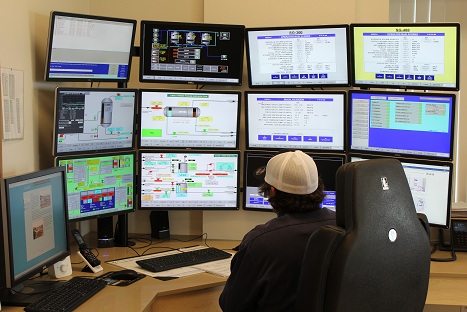 The rapidly evolving technology of cyclic steam injection allows us to access a much shallower reservoir, lying at a depth of approximately 700 to 1,100 feet below the surface. Oil at this depth is stored in diatomite, a soft, chalk-like rock formed from the fossils of single-celled algae called diatoms. During the steam injection process, steam created from recycled production water is pumped into the reservoir for five to six days in order to heat the formation, which allows oil within the diatomite to flow freely to wells on the site.

Cyclic steam injection is a sensitive and sustainable method of producing oil. Newly developed pumping units on our diatomite wells are more efficient, emit less noise, and create a smaller footprint than a typical pumpjack. Our steam operations are closely monitored 24 hours a day by state-of-the-art digital technology, and overseen by highly trained staff in our operations control room. This careful monitoring helps ensure that our operations remain safe and environmentally responsible at all times.

See photographs of our operations at Orcutt Hill.